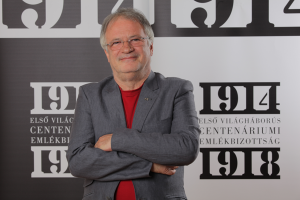 Vice-chair, historian, Director of the Institute of Habsburg History

András Gerő graduated from Eötvös Loránd University with degrees in history and sociology in 1977 and became the lecturer of the Faculty of Humanities of the same university and from 1981 to 1995 the lecturer of the Department of Cultural History. Since 1991 he has been a professor of Central European University. From 1993 to 2010 he was the chief editor of the Hungarian-language periodical Budapesti Negyed (Budapest Quarter). From 1995 to 2017 he held the position of head of department at the Department of Economic and Social History, Faculty of Humanities, Eötvös Loránd University, currently he is a professor Emeritus at the same faculty. He has been a visiting professor at various universities abroad (Minnesota, Utrecht, Amsterdam, Pennsylvania, Columbia). Since 2003 he has been the director of the Institute of Habsburg History. The Hungarian State acknowledged his research results with the Széchenyi Prize in 2008. He obtained his DSc degree from the Hungarian Academy of Sciences in 2006. His main areas of research include the history of the Austrian-Hungarian Monarchy, bourgeois development, symbolic politics and the history of Budapest. He is the author of several books and other publications. His latest book was published by the Public Endowment for Research on Central and Eastern European History and Society under the title Hit, illúziókkal in 2019. He has been the member of the Scientific Advisory Board of the First World War Centenary Memorial Committee since 2013.